I think I’ve inadvertently taken a break from my photography, and I think it’s done me good.

For 4 weeks, my daughter, her boyfriend, and the boyfriends parents (though the latter two were only here for a week) have been staying with us and there has been no photography time, apart from the images I captured of them, during their stay.

Similarly, whilst they’ve been here, I didn’t go to the camera club, and didn’t really interact much with any other photographers.  I found that whilst I missed their companionship, I didn’t miss taking photos.

At first I thought it was odd, but then I had so many other things to occupy me, that it made sense.  Since they left though, the urge to shoot hasn’t come back in any meaningful way.

I was left to wonder if this is a bad thing, and came to the conclusion that it’s not. I’ve had time to sit and plan what I’m going to do next, and actually the planning is making me more creative.  I’d been worrying (unnecessarily as it happens), about upcoming competitions, exhibitions and qualifications.  Worry stifles creativity.

I’ve taken myself back to basics, and this week dug out the moth trap, and caught some stunning insects, which I was able to shoot slowly, and with a bit more thought than usual.

This is the Elephant Hawk moth, and I spent a long time looking for the right flower to put it on, and the right background to shoot it against.  I spent a couple of very happy hours with this, and other insects caught during the night.

So, it came as a bit of a surprise that when I checked my diary for July, it was rammed full of shoots – and even more of a surprise was that I was aching to get at it – and get some good images in the bag.  I’d been putting everything off till after the family had been and gone.  The ‘forced’ break did me the world of good.  I’d stopped thinking about up and coming competitions, and stopped worrying about where the next shot was coming from.

Hats off to those good folk who do the 365 projects, and take a photo every day for 12 months.  I tried it once, and after about 3 months gave up.  I was forcing images, and they slowly got worse and worse, as I made do with what I had.  Even cheating to get that image online for that day.  Never again……..

So, for the next week, moths…. I’ll put the trap out again in a day or two, and see what pops up.

In the meantime, this one (above) is a Golden Y moth, and the shot below, is the Eyed Hawk Moth 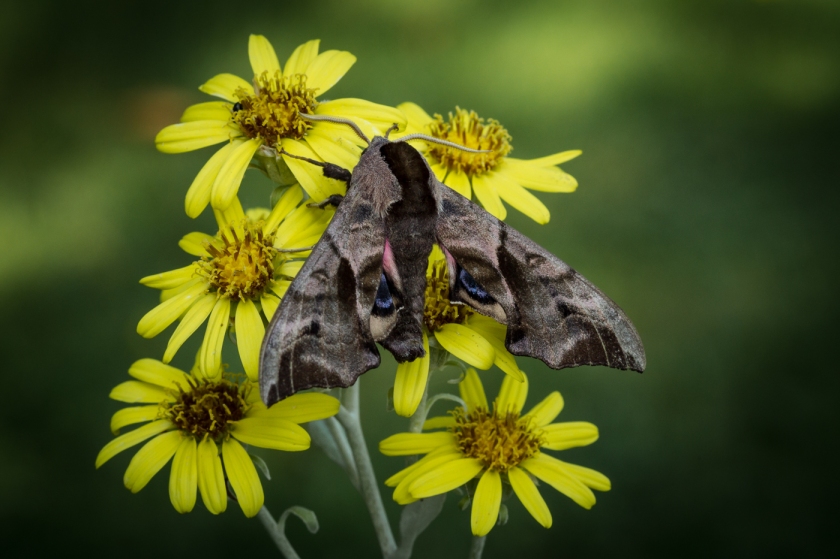 The moral I think is to not worry if you don’t do something you love for a period of time – absence really can make the heart grow fonder.  It really doesn’t mean that you love it any the less.