Do you find that sometimes people take photography far too seriously?  I’m not talking about professionals, who just have to be more serious than us – but about people who don’t seem to ‘get’ the idea that you can relax and play with your cameras and images.

For example…. I took this image just before Christmas 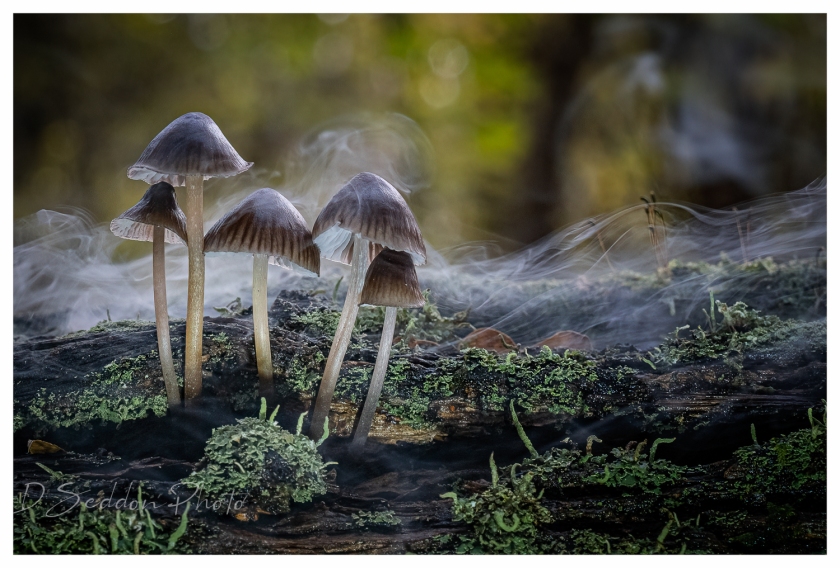 A friend and myself went to the local woods to shoot some macro – and he had with him a portable smoke machine – well, we had a rare old time, messing about, crawling in the undergrowth – letting the smoke off, and watching the way the breeze seemed to change direction between every shot we took.

We must have taken a lot of images – and were caught by the woodland warden / conservationist, who thought it was funny to see two aged photographers grovelling about in the undergrowth.  He asked what we were doing, and was interested in the effects we were trying to get.  He liked the images too.

Anyway – I posted this image on a social media site, and was heavily criticised by another photographer for putting artificial smoke (read fog) into the image.  At first I was accused of putting the ‘fog’ in during post production.  When I said that we used a smoke machine – I was told that it wasn’t natural, and we shouldn’t have done it.  I tried to explain that it wasn’t toxic – that there was no harm being done, and we were just having fun……  The same poster said and I quote “there’s no fun crawling around getting dirty, and you shouldn’t be using a smoke machine in a public place…..”

So that told me off then…..

I don’t think I approach photography as something trite, but I do enjoy trying new things.  I think the challenge for the commenter here is to find the balance between being stuffy and dour, and letting go to enjoy the hobby. 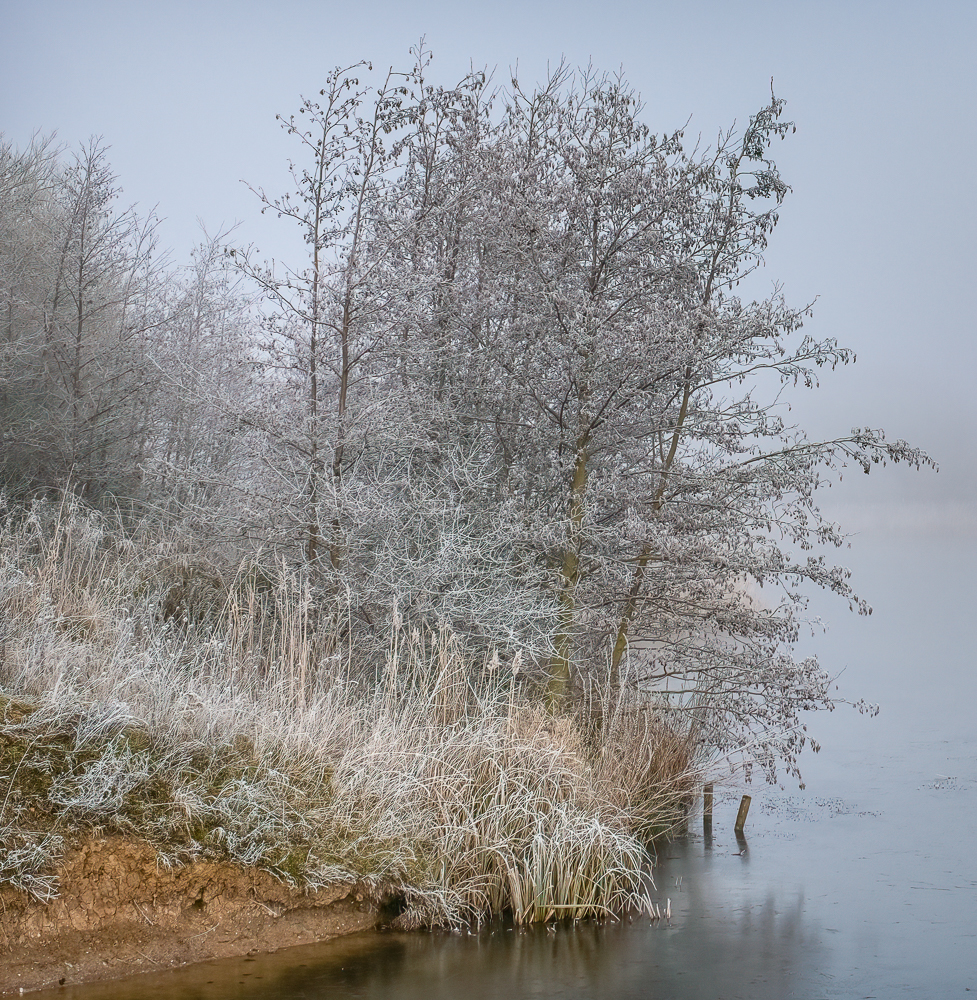 How often do you hear the phrase “I only shoot in the golden hour”, or alternately “I won’t shoot in the middle of the day”?

I’m constantly surprised by these remarks, because, if you think about it, it only leaves a few scant hours to shoot in the Winter, and it must knock at least 12 hours off your Summer schedule too.

Life goes on, and light goes on, even during the day – and at mid-day too.

I grant you that good light is great, and when it happens, and you are there – the images, you just know, are going to be amazing. The caveat is, that this great light, has to have something great on which to fall.  No subject equates to no picture.

This week, (early in February) the weather in the UK has been pretty grim.  The folks down South seem to have had the worst of it, but up here in the micro climate that is the East Coast of Lincolnshire – we didn’t get a lot of weather as such.  What we did get was a blast of freezing fog, grey sky, sleet, and as I type a smattering of snow.  ( And even as I finish that sentence – the snow stops and the sun comes out)……..

However, I digress – I had to go out – I had an appointment that I was not able to change, or postpone, I had to go.  The roads were icy (I’m three miles from the nearest main gritted road), the fog was thick and patchy, and if I hadn’t had to get out, I’d have stayed in and watched the fog!

So, when I did get the car out, I thought I’d take the camera….. just in case.  turns out it was a good thing I did.

Appointment finished about 10am, and the fog was still freezing – the car said -5 but I thought I’d head out to the coast.

First impressions were not thrilling, and the cold air took my breath away. 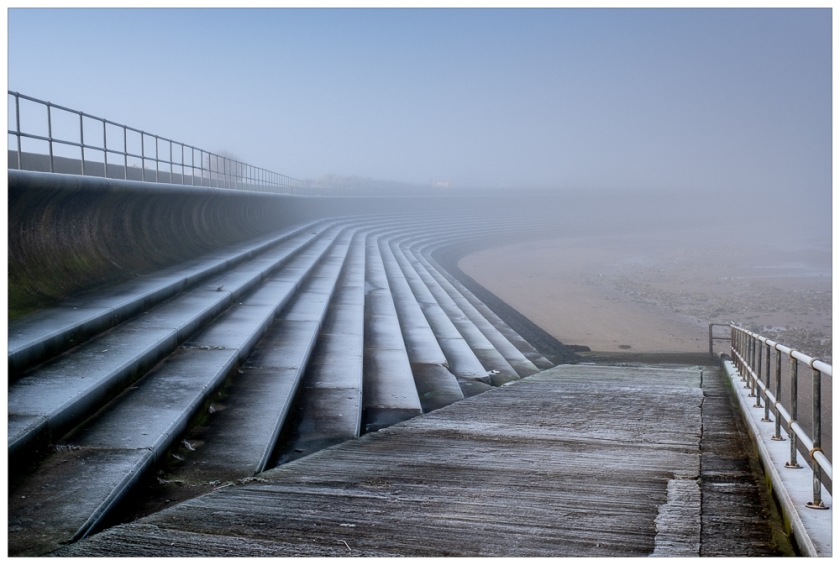 None the less, I enjoyed the lead lines fading away into the distance.

It was heading up to 11am by the time I arrived at my next location – which I swung into on impulse.  It’s the Country park, which is usually chock full of dog walkers and joggers.  The paths were OK, but the car park itself was lethal.

The hoar frost made everything look much more beautiful, and the low light gave everything an air of peace.

By changing the white balance on the camera from sunny to cloudy, it warmed the pictures up a little but still allowed for that feeling of cold.

Moving around the lake to the jetty I found that by shooting low – (this means sitting in the frosty grass by the way), I was able to get my favourite shot of the day.

A tweak or two in photoshop, add a vignette, and I’m done.  It’s lunchtime.  The light is directly overhead, it would be harsh but for the fog (now lifting) – it’s revealed the textures in the icy water and in the wooden stumps.  There’s no cloud, so I’ve not shown much of the sky.

All in all, I’m glad of the appointment – I’m glad I shot in the worst part of the day – chose the wrong weather, got cold, and wet.  It was worth it.

Get out in the ‘weather’, whatever it may be.  You just don’t know what will be revealed.

I was on my way to a job a couple of years ago – fairly locally.  I had a deadline to be with the client to photograph a presentation, and didn’t really have time to stop on the way.

Driving past, I saw this boat – moored up, and I thought, that’s great – I’ll go back an shoot it on the way home, or maybe another day.

The voices in my head, that I’ve talked about before, and said you should listen to – shouted at me “do it now”.  I did, I stopped the car, got out, and took this one image. 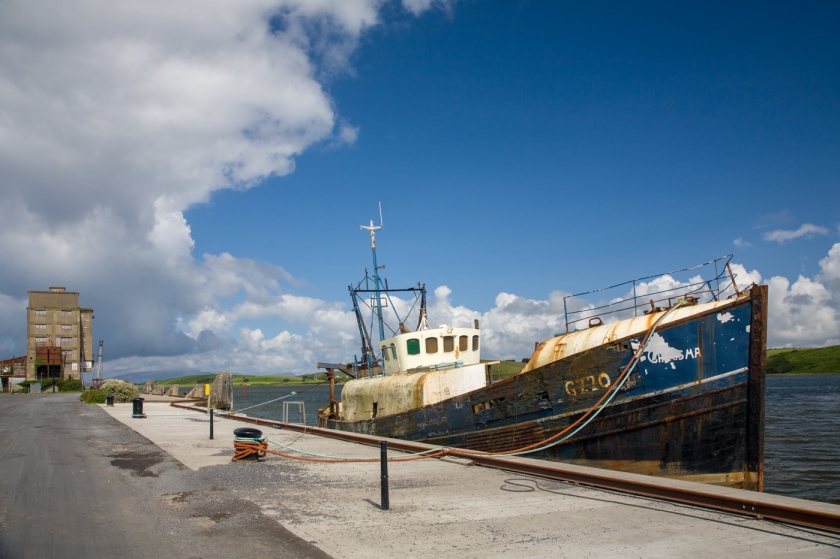 When I was finished – I drove home the same way, back to see the boat again.  There was no boat any more.  It had gone.  No longer any photo for me to take.

So, I reiterate….. “Never Go Back”… shoot it now.  When and if you do go back it won’t be the same.  It can never be exactly the same.  The weather will change, the light will change.  The thing you want to shoot may not be there any  more.  It might be better, or worse, but never the same.

I always tell people to keep going back to the same location – over and over – to see it in different lights, moods, and seasons.  You will have a different attitude, and a different mood.  You will try different viewpoints.

I think that unless you have not had anything to do with lightpainting – you will have heard of the Pixelstick.

In case you haven’t, the Pixelstick received over 6 times it’s kickstarter funding goal in 2013.  I got hold of one in early 2015, and though I’ve taken it out to various camera clubs, and demonstrated just what can be done with it, I have to confess, that I’ve not used it myself really very much in anger.

For those of you who are unfamiliar with it, the Pixelstick is an array of 200 addressable RGB LEDs. This means each LED can produce almost any colour, and each one can be instructed to flash on and off at a particular speed and colour sequence. With the right set of instructions, the LEDs can be used to mimic the pixels of a bitmapped image, so as the Pixelstick is moved through space, the LEDs effectively ‘draw’ the bitmap in midair and can be captured during a long exposure photograph.  It works a bit like an ink jet printer.  As you see a print coming out, one line of ink at a time, so the Pixelstick works in much the same way, but with light.  BMP files are saved to an SD card which sits in the control panel, and allows you to replay any image saved on there in the correct format.

The camera stays still, and as you move the lights along in front of the sensor, the colours are captured line by line, making up an image, or pattern.

The website is HERE if you want more information…….

It’s possible to add more than one image to overlay another, making up complex pictures.

There’s a group of lightpainters who really don’t like this kind of equipment – they much prefer to have all their lightpainting done with different techniques and self made equipment.

Personally though, I have not got the time, inclination, know-how, to  make some of the things they use – and so I use this rather wonderful Pixelstick instead.

Combine it with people, and you can make amazing silhouettes – and portraiture works well too, as you can make what ever kind of background you like.

Add a touch of inventiveness, and you can make anything you like.  I’ll be exploring this kit in more detail over the coming months.

In the meantime, I leave you with the GIF I created earlier today – don’t look at it for too long, or your eyes will most definitely go crazy……..